Based on this one might think that when HaKodosh Baruch Hu said to Moshe that He would destroy the Bnei Yisroel and build a new nation with Moshe, that Moshe would agree to it. He saw that no one was mourning what they thought was his death, in fact they were dancing, singing and playing musical instruments. Yet with all this Moshe Rabbeinu was mevater on his own kavod and furthermore davened on the Bnei Yisroel’s behalf.

We learn from Moshe Rabbeinu what it means to be a true manhig and leader. That the leader needs to have tremendous misirus nefesh and achrayus for his tzibur no matter the circumstance.

If a person steals and has no money to pay back, he becomes a slave. The maximum sentence is six years but at the end of six years he wants to stay longer then he gets his ear pierced and he stays until yovel.
Rashi quotes the medrash that the reason why the ear gets pierced is because “The ear that heard at Har Sinai ‘Do Not Steal’ went out stole”.

The mefarshim ask, this person stole six years ago, that’s when his ear should get pierced, why now that he wants to stay with his master longer do we pierce the ear? Secondly the medrash that brought ‘Don’t Steal’ was referring to kidnapping not stealing money. So what is the connection to this eved who stole money and the Aseres HaDibros that was referring to kidnapping?

Rav Shimon Schwab explains as follows. When you kidnap someone who are you kidnapping them from? Not their parents, siblings, children or any other family members. None of the aforementioned actually owns the person. HaShem is the only Owner and Master of a person. So now when this eved says “I love my master I want this new master to be mine” he is essentially kidnapping himself from Hakodosh Baruch Hu and making a different master for himself. So the reference to the Aseres HaDibros is applicable. And that is why we pierce his ear now. Because it is now that he is ‘kidnapping’ himself away from HaShem. We should continue to be avadim to the One true Master.

On Wednesday evening, December 25, the fourth night of Chanukah, Yeshiva Mercaz HaTorah of Belle Harbor held their Chanukah Mesiba. The annual mesiba is a highlight of the year, with talmidim, joined by their families and Rebbeim, enjoying an evening of chizuk and chashivus haTorah.

The program began with a siyum made by Binyomin Wulliger on Maseches Makkos, which was followed by spontaneous and spirited dancing as the bochurim rejoiced in the simchas haTorah.

In the weeks leading up to Chanukah, the bochurim were busy chazering and preparing for the Rosh Yeshiva’s bechina on the gemorah that they are learning. The bochurim who received an aleph were called up individually at the mesiba and given a sefer from the Rosh Yeshiva, Rav Shumel Zev Dicker, shlita. He mentioned that Chanukah is the appropriate time to be machaziek in learning, as the yevonim tried to destroy the kiyum haTorah of Klal Yisroel.

Rabbi Shlomo Pheiffer, shlita, Rebbi in Darchei Torah and formerly in Belle Harbor, then spoke about true simcha, limud haTorah and how that true simcha is what guides us through the choshech of today. He urged the bochurim to keep learning and chazering every daf gemorah as that is what will bring light into someone’s life.

The seudah that followed was enjoyed by everyone and the bochurim then joined in for leibidike dancing. The bochurim encircled their Rebbeim and danced with gusto late into the night. It was an uplifting and spirited mesiba. 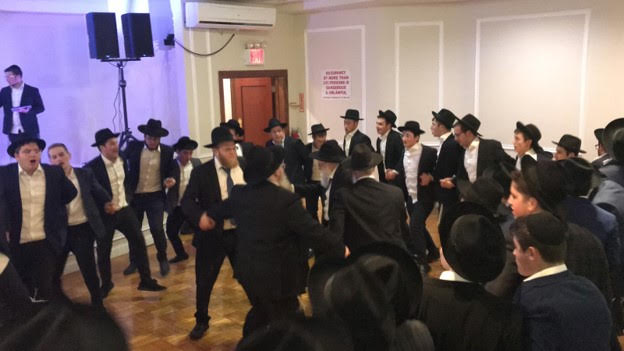 Come join Yeshiva Mercaz HaTorah for our annual Alumni Shabbos. The Shabbos is set to be another memorable experience as Rebbeim, talmidim, fanilies and old friends join for an inspiring and relaxing Shabbos of achdus. It’s a unique Shabbos that will be an enjoyable and memorable experience for the entire Mercaz Hatorah of Belle Harbor family.